IITA with partners United States Department of Agriculture (USDA) and Institute for Agricultural and Environmental Research in Burkina Faso (INERA) is convening a stakeholders’ conference aimed at increasing awareness of the hazards of aflatoxins, understanding the peculiarities of aflatoxin contamination in local farming areas, and promoting biocontrol mechanisms for stemming its spread in susceptible crops throughout Africa. The stakeholders’ meeting is taking place 23–24 April at the Splendid Hotel, Ouagadougou, Burkina Faso. Participants include producers, scientists, and private-public sector partners working directly with the aflasafe project in reaching farmers in the region and seed companies, CNRST, USDA-FAS, Nestle, and partner universities.

Aflatoxins are naturally occurring poisons produced by fungi known as Aspergillus flavus and others which contaminate the soil and crops (especially maize and groundnut). This contamination has debilitating effects on human health, lowers production of livestock and agriculture, and severely restricts trade opportunities for most farmers in sub-Saharan Africa. Specific interventions in the form of biocontrol mechanisms can, however, be employed in controlling and preventing aflatoxin contamination. This approach significantly improves the security and quality of agricultural produce and increases trade opportunities for stakeholders all along the value chain. Dr Ranajit Bandyopadhyay, IITA Pathologist (middle row, with laptop), gives an update on the aflasafe project, the factory in IITA Ibadan that produces the biocontrol product, and the market models being used in Nigeria, Kenya, and Senegal to promote access to aflasafe.

IITA has adapted a biocontrol approach for Africa that changes the composition of fungal communities by letting local strains of nontoxic A. flavus (atoxigenic strains) become established in the crop environment in place of strains that produce large amounts of aflatoxin. A biocontrol product, called aflasafe BF01, for Burkina Faso was developed by
IITA and partners to reduce the rate of contamination in crops and subsequent risks.

aflasafe BF01 is a natural, simple, safe, and cost-effective product that uses native nontoxic strains to replace aflatoxin-producing fungi. Similar products are being developed or used in more than 10 other African countries. Trials of BF01 have shown a remarkable reduction in aflatoxin contamination in maize (85%) and groundnut (94%). These results have encouraged IITA and its partners to explore the opportunities for escalating the adoption of aflasafe as an effective tool in preventing the spread of aflatoxins in Burkina Faso in particular and sub-Saharan Africa in general. This can be achieved by educating stakeholders about the dangers of aflatoxins and the efficacy of aflasafe. 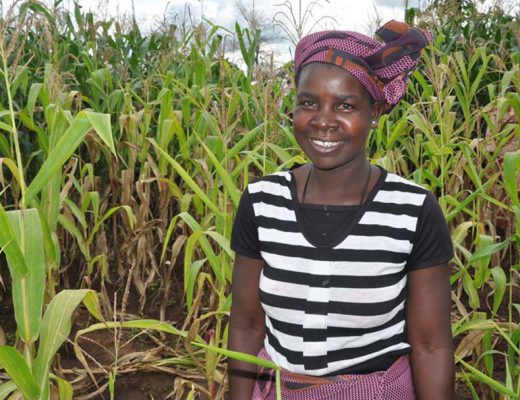