The ATASP-1 is financed by AfDB to the tune of US$170 million and aims at creating additional incomes to an increased number of producers and entrepreneurs in the agricultural sector in Nigeria by providing about 120,000 jobs along the value chain of priority commodities. An additional 20 million tons of key commodity food crops including cassava, rice, and sorghum will be added to the domestic food supply each year. Akinwumi Adesina, Minister of Agriculture (in glasses, center) and DG Nteranya Sanginga (in pink tie) with guests during the stone-laying ceremony in IITA. Abuja.

A significant part of the project is developing outreach models with young entrepreneurs in agriculture, “IITA youth agripreneurs”. This component will be implemented by IITA which has established a Youth Agripreneurs scheme at its Headquarters in Ibadan, Oyo State, and in DR Congo, Kenya, Tanzania, and Zambia. The Agripreneurs are promoting agriculture among other young people in their regions through peer education, training and demonstration of agricultural best practices, and business skills in value chain development.

“Many young people are migrating to cities in search of a better life. We need to create opportunities to engage them productively in agriculture and other business enterprises,” said Dr Nteranya Sanginga, IITA’s Director General during the launch in an interview with reporters. “This project aims to build on the youth model developed in IITA to change mindsets of young men and women and gainfully engage them in agriculture,” he added.

AfDB’s Chief Country Program Coordinator, Andoh Mensah, explained that the project would capitalize on IITA’s participatory approach and would train and retrain young men and women along the commodity value chains. According to him, the ATASP-1 is part of the Bank’s efforts in contributing to the Agricultural Transformation Agenda (ATA) of the Government of Nigeria, which aims to create 3.5 million jobs along key crop value chains.

The Minister of Agriculture and Rural Development in Nigeria, Dr Akinwumi Adesina underlined that “Africa’s future millionaires and billionaires will make their money from agriculture,” as the governments marshal out plans to unlock wealth from the soil. He estimates that the bulk of this new wealthy population will be made up of young people adept at creating jobs for millions in each African country and bringing business opportunities to rural communities all across the continent. The Minister further enjoined the youth to stop seeing agriculture as a tool for development but as a business.

He reasoned that agriculture is now an exciting sector. “Today, major local and international investors are investing in this sector. The number of seed companies alone has risen dramatically and the banks are lending to the sector more than ever before.”

Adesina is among the five candidates who have been shortlisted to contest the presidency of the African Development Bank.  The AfDB Board said the selection of the most eligible candidates to succeed President Donald Kaberuka was done by a Steering Committee of the Board of Governors at a meeting held in Abidjan on 11 February 2015.  Ethiopia’s Finance Minister, Sufian Ahmed; Cape Verdean Finance Minister, Cristina Kamara; the current Vice President of the Islamic Development Bank, Birama Sidibe; and Chad’s Finance Minister, Kordjé Bedoumra have also been shortlisted for the elections slated for May 2015. 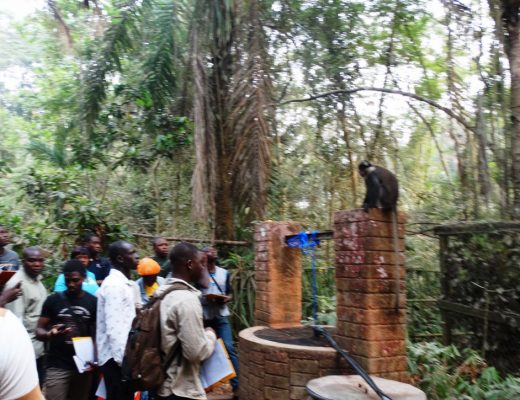