Okafor (in a hat) poses for a photo with the winners of the Most Valuable Colleague (MVC) of the year (to his immediate right) IITA’s Ghislain Kakule and CIAT’s Elise Mundwanga.

On 23 December 2013, IITA-Kalambo held a Christmas and year-end party to celebrate Christmas and reflect on its achievements over the year. The event which was held in collaboration with CIAT and Biodiversity International was attended by staff and their families. The event was geared towards improving relationships among the staff for effective team work and collaboration and for their families to get to know each other and exchange Christmas and new-year wishes. The CIAT Coordinator and Country Manager of HarvestPlus, Antoine Lubobo, gave the opening remarks and welcomed all the families to the event while the Officer-in-Charge of IITA-Kalambo, Chris Okafor, made the closing remarks. Okafor, accompanied by his wife, thanked all staff for their diligence, dedication, and contributions to the success of the Station. “This is the first time that CIAT, Bioversity, and IITA staff are celebrating together. This goes to strengthen the fact that we are a family and I am convinced that the next year will be more even more successful,” Okafor noted. Also during the event, the Most Valuable Colleague (MVC) of the Year among the nationally recruited staff at IITA and CIAT, as voted by their colleagues, were recognized and given appreciation plaques and gifts. The winners were Ghislain Kakule, IITA Station Accountant, and Elise Mundwanga, CIAT Research Assistant. Two children of staff members―Kaambira Hense and Mugaruka Regie―who were successful in the IITA Women’s Group 2013 Scholarship scheme also received their award certificates at the event. 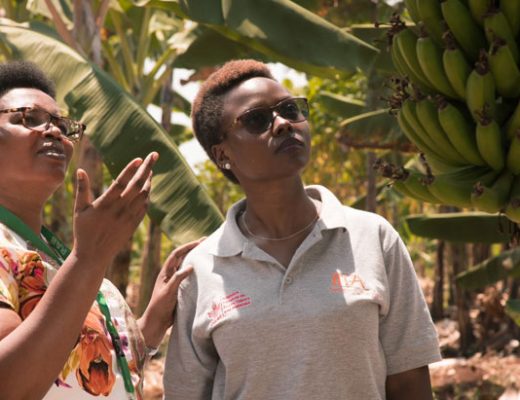