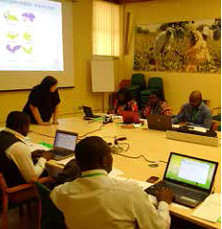 The workshop was attended by 15 laboratory scientists from various laboratories in Nigeria. It aimed to present the basic principles and techniques for understanding the evolution of genes and genomes. The steps required from checking a sequence to constructing a phylogenetic tree were also covered.

The workshop was facilitated by Jane Wright, an expert in Phylogenetics from Inqaba Biotec with a PhD in Biology from the University of York, and a teacher of Phylogenetics for over 15 years.

During the workshop, the participants learned about Base calling, Distance analysis using PHYLIP and MEGA 6, Sequence Alignment and Primer design. They also toured the IITA Bioscience Center where Yemi Fasanmade, Lab Manager, enlightened them on the various activities and research carried out in the labs.

At the end of the workshop, the participants said they were impressed with the course content and the organization of the workshop in general. They showed interest in having an advanced workshop as a follow-up in the future.

Inqaba biotec West Africa is a subsidiary of Inqaba Biotec, a genomics company with headquarters in South Africa. Its West African office is located at the Bioscience Center, IITA- Ibadan.